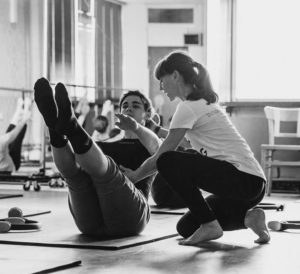 After studying at the University of Antwerp with a degree in Political Science and Sociology, she decided to continue her interest in dance and movement. For many years she was a teacher at dance studio Arabesque, where she taught children’s dance and classical ballet and the last years of her career she taught pilates.

She followed Triadball Pilates workshops with Michael Fritzke and Ton Voogt in Oslo. In April 2006, 2007 and 2009 she attended the Body-Mind-Spirit Conference in Santa Clara California.

She attended anatomy workshops with Lori Coleman-Brown from Seattle and Sabina Formicella from Italy.

Most recently, she followed several workshops Dynamic Alignment Through Imagery with Eric Franklin from Switzerland and by Kathy Cory, Marie-José Blom and Brent Anderson.